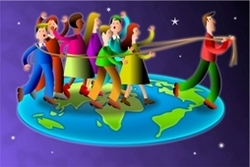 I listened to the Tenrox “Managing People in a Flat World” webinar earlier this week, the title of which inspired my first “Leading Teams in a Flat World” post a week ago. The webinar did not elaborate on Flat World needs much, but launched very quickly into the sales pitch for their project management tool. This was OK and really all I expected from a vendor company, kudos to them for at least tying the webinar into a timely, relevant best-seller. However, it did get me thinking into how companies should be preparing to harness Flat World forces.

When new tools became available during previous work revolutions, organizations were slow and clumsy to adopt them. When electricity replaced steam-power, companies attempted to replace their single, large steam engine that drove the factory machines via large belts, with a single large electric motor that drive machines via the same dangerous and unreliable belts. It took many years for companies to change from tall compact factories that facilitated centralized power distribution, to long, low buildings that more efficiently embedded smaller electric motors in machinery. I think there is a parallel here with our attempts to harness Flat World powers to-date.

So far we have been trying to co-locate geographically dispersed teams using virtual team-rooms and propagate our existing ideas about companies and teamwork. However, perhaps we should think beyond shoehorning a globalized workforce into traditional companies, and instead embrace new company structures that better fit a diverse labour market. I have an interest in local company Cambrian House who are attempting to do just that. Rather than develop software using only an in-house team of salaried employees, they have created a model to outsource software development to the world via a profit sharing open source model.

Tasks and work packages are offered to contributors in exchange for a percentage of profits of software sold. Community members (from anywhere in the world) can declare an intent to work on a task and submit their completed components for evaluation and integration. Obviously the co-ordination, evaluation and integration work takes effort, but if a company with say, 20 full time employees can leverage a pool of 2000 remote, voluntary contributors who only get paid if a product generates a profit, then suddenly a disruptive new force in software development has been created.

India, Russia and China have a wealth of talented software professionals who can now be harnessed by companies willing to realign their structures to make the most of up-and-coming talent. It may seem unlikely to find a capable software professional in China who speaks English, wants to contribute to a profit-share initiative, has the right technical skills, and is available; perhaps 1 in a million. However, as Friedman observes, if you are one in a million in China, it means there are 1300 other people just like you! As English becomes taught as a mandatory language in more Chinese schools and highly educated software engineers continue to graduate in countries like India, companies that can harness this talent will prosper.

Of course to be truly effective in the flat world we need to tap into creative talent not just production talent. Make no mistake, emerging markets are chasing after these goals too. I find it interesting that when we lead teams to create innovative new products we spend time creating a guiding vision, sharing project information, and removing roadblocks to progress. The Chinese invented the compass, papermaking & printing, and gunpowder, all effective tools for each of those roles. Organizations that can find ways to leverage global creativity and production will soar above the new flat world.