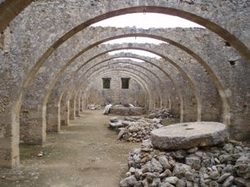 According to legend, Merlin the magician was a great help to King Arthur because he knew what was going to happen since we has living his life backwards. This allowed Arthur of avoid obstacles and thwart enemy plots before they happened or were even schemed of.

Project Managers can benefit from engaging the team in backwards planning from the desired end goal, through the required deliverables, to where we are today.  On Agile projects the exact end point may not be known as some functionality will evolve as new details emerge. However the Merlin exercise can be used for single iterations or sub-systems where the end goal can be easily described.

To use this process start by describing the completed solution with all the components and success criteria in place. Get the team to list all the technical attributes that must be in place. Then moving backwards, brainstorm each successful step that occurred to produce the desired outcome. Ask the team what the likely roadblocks for each of these steps might be and then ask how they would best be overcome.

The real power of the Merlin exercise comes from imprinting an image of success, seeing solutions to potential roadblocks that may occur, and starting (a perhaps daunting endeavour) from a view of victory. As the project progresses and the inevitable roadblock are encountered, having already discussed how they may be overcome speeds the remediation process.

Backwards planning also helps address “fade” where people struggle to identify steps a little further down the line from where they currently are. By starting at the end and asking for all things that must have contributed to the success we have two “starting” points for planning and more opportunity for team input.

The Merlin Exercise and other great techniques are also described in Project Leadership: From Theory to Practice by Jeffrey K. Pinto, et al. Q: Can you use Earned Value on Agile projects?
A: You can, but I would not recommend it. There are fundamental problems using EVA on agile projects relating to baseline plan quality. Also there are better alternatives available for agile projects.

Earned Value analysis and reporting measures conformance and performance to a baselined plan. So, given that on agile projects we know that our initial plans are likely to change, why track progress against a weak plan?