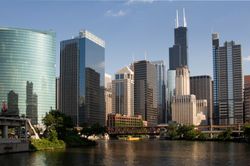 On Tuesday I was in Chicago for the PMI Agile Community of Practice launch event. It was hosted by Thoughtworks and kicked off by Martin Fowler and Jim Highsmith. Jesse Fewell and I introduced the community and outlined the goals.

With getting on for half a million PMI members worldwide, many in the knowledge-worker domain, agile methods have a lot to offer this already huge community. It is set to get larger too, PMI member growth progresses at about 20% per year, and PMI research indicates there are up to 20 million people engaged in knowledge-worker projects worldwide.

The spread of agile ideas to the PMI is inevitable and already happening on many fronts. I was concerned that it would be adopted incorrectly, fail and then be dismissed. This is still a risk, but with the launch event at Agile 2009 and an open invitation to Agile Alliance members to get involved and drive the initiative, the hope is that the initiative will succeed.

For an event that proposed bringing agile and PMI groups together, there was surprisingly little conflict or debate. But, then I suppose those people opposed self-selected and chose not to attend. Besides, few people subscribe to a purely agile or purely traditional approach to all projects anyway. We have to be pragmatic and chose our approach based on project and organizational circumstances.

The “PMI-Agile Community of Practice” is a free to join group aimed at “Equipping PMI members with Agile knowledge and skills".  For more details see the community wiki.