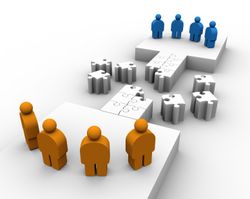 There has been some hubbub on the PMI Agile Yahoo Group these last couple of weeks. A lively back-and-forth about a slide deck published by the PMI Network magazine entitled “Is Agile Right for your project?”

The original slides were here, but interestingly the slides appear to have been taken down now, or perhaps they have been temporarily lost in the recent PMI web site reorganization. An example of some of the feedback can be seen here. On the one hand I think the PMI should be applauded for making some steps towards providing information for its members. On the other hand the material could have been vetted by some members of the PMI Agile Community of Practice before release to smooth out the contentious issues and avoid the backlash.

I recall the original request for information on agile adoption guidance was sent to the PMI Agile Community of Practice. I submitted my thoughts on the topic (posted previously here) and many other people joined in the discussion thread, but I am not aware of what, or if any, of this information made it to the original requestor.

Anyway, my point is not so much on the content of the slides and what was right or wrong, but more on the reconciliation of agile and traditional PMI mindsets.

Social Integration Problems
Whenever two different groups come together for the first time, we get some friction, clashing of norms, exposing of preconceptions and good old fashioned faux pas by one or more groups. But, hey, it at least means the two groups are coming together and providing we have thick enough skins to tolerate the friction progress can be made.

Jane Jenson, from the University of Montreal, provides a model for social integration that lists 5 characteristics that need to be in place to create good social cohesion between different groups: