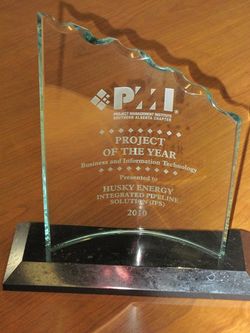 This was a regional competition, not the national one, but I am really pleased to report that the IPS project I managed for the last 3+ years won the PMI-SAC Business & IT “Project of the Year” award at last week’s PMI Gala and Conference.

The Integrated Pipeline Solution (IPS) manages about a third of Canada’s heavy oil transportation. While you may think tracking oil moving through a pipeline sounds pretty simple, like anything, the devil is in the details. Husky has about 30,000km of pipeline and complications such as blending products, forecasting production, optimizing capacity, custody transfers, billing, accruals, etc and the fact that billions of dollars are at stake mean that the rules, regulations and complexity adds up pretty quickly.

We had an amazing team and engaged, savvy business representatives – these were the real reasons for success, not the methods we followed. However, there were lots of challenges too and our approach helped us here. We “inherited” the project $1.1M behind budget after an outsourced vendor doubled their estimate following a year of analysis. They were asked to leave and the project was brought in-house, but with no adjustment to the original budget.

Agile methods excel at fixed budget projects providing the sponsor is willing to flex functionality. This is what occurred and we actually ended up delivering more functionality that originally scoped within the initial budget.

The PMI Awards assess projects on a variety of criteria and asks for submissions in a specific 10 page format. I will spare you the 10 page version and instead list a quick summary of the benefits:

Of course, when submitting the write up you do not know who you will be up against that year. Apparently there was a bumper crop of submissions this year and the final three came down to our IPS project, a major EMS IT Transition project, and a 100 person project to implement a new diagnostic imaging system.

Due to a scheduling conflict, I was in Scottsdale teaching an Agile Project Management course for the PMI SeminarsWorld program during the awards ceremony, so I missed the event. After 3 years of involvement on the project this was unfortunate to say the least, but our IT manager and a business SME who had both  worked much longer than myself on the project were there to receive the award so that was good.

The fact that an agile project won a PMI Project of the Year Award never came up. The 10 page submission asked for lots of details on risk management, planning, estimating, tracking, etc and the agile accounts for these processes obviously met the review panel criteria. My hope is that in 5-10 years time the term “agile project management” will not be talked about in our industry and instead we just have broader set of generally accepted project management tools at our disposal.

Anyway, I am super happy that we  received this award, the project was a long struggle made worthwhile and rewarding by the great people involved.

(Attached below are a couple of slides used at the Awards Gala to summarize the project.)
Download IPS Overview-1

How do the activities described in your post match with the Agile Manifesto?

Were those Function Points calibrated according to IFPUG or COSMIC guidelines? If so, what was the attributable cause for a 6 standard deviation from the mean for this performance?

Who is the author of this article, who was the team lead? Congratulations but would like to know who to congratulate!

Thanks, comparing the agile manifesto and agile principles to what we did on the project, I see no major gaps. The manifesto values and principle are rightly broad by definition, and we did everything they describe, but as a side effect to practical working rather than as a goal for our approach.

I counted the function points following IFPUG guidelines, in a previous role for IBM, I spent a while counting function points for IBM clients. I am not a big fan of function point counting because they require a high effort to count accurately and fail Dan Reintersen’s “Self generating, simple, and relevant to the end goal” definition of a good project metric. We tracked them on the project as part of making a business case for retaining team members during an attempt to downsize the team and replace some expensive resources with cheaper ones. Function points were understood by the IT management team and so I used them to illustrate how well the current team was performing and how a switch to market average rates and performance would likely be a net loss.

I think looking to the approach we used to get these great results might be missing the bigger picture. Barry Boehm’s COCOMO model rates the People Factors on projects as an effort factor of 33; it also rates “Processes and Tools” as a factor of 3. These numbers suggest having the best people on your team is an order of magnitude more important (33 vs 3) than the process or tools you happen use.

Over the last 16 years I have worked on many agile projects, some following agile guidelines very closely, others only loosely. What was special for me about this project was the calibre and cooperation exhibited by the team and the support from the business.

Thanks for dropping by, I (Mike Griffiths) was the author and lead for the IPS team. Posting to this site used to insert a "posted by" name, but no longer appears to, the secrecy was not intended!

Mike,
I don't have any specific questions. I just wanted to offer a sincere congratulations.
It's nice to hear of your success story.

Again, congratulations to you and your team!

Thanks, and thanks too for your offer to assist with the PMBOK 5 work.

COSMIC not COCOMO. And which version of COCOMO are you using?

As I said, the function points were counted based on IFPUG guidelines, not COSMIC, The COCOMO figures I discussed are from the COCOMO II model.