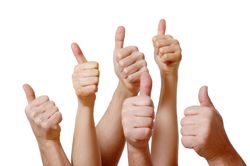 What is project success? Is it just on time, on budget, with required functionality, and to a high quality standard? Or is there more, some missing X factor, a good after-taste, or resonance that we just know is great?

I did some training for a client recently who is interested in measuring project success. The traditional constraint measures of on budget, on schedule, happy stakeholders were not cutting it for him. They were missing this unknown element he was really more keen to measure. We talked about other measures of success including how people feel about the project and the act of leaving a valuable legacy.

There are plenty of examples of projects that might be judged failures by the constraint measures of on budget, on schedule, etc, but successes in terms of how people felt about them and the act of leaving a legacy. They include the Apollo 13 mission, the Titanic Movie, Shackleton and the Endurance, and the Iridium Satellite Network. I wrote about how these “failed” by constraint measures were successes by other measures in a post a couple of years ago.

This still was not satisfactory and these measures were often only apparent long after the project was done. They were too late and retroactive, my client wanted something he could use right now to get a better handle on projects. It turns out what he was looking for might be better explained by Actor Networks with Convergent and Divergent behaviour, (but I did not know that then, so back to the story.)

Bothered by not fully answering his question, I attended the Agile on The Beach conference in Cornwall, UK. I flew into London, where I worked in the 1990’s at Canary Wharf and saw the Millennium Dome being built. Seen in films such as James Bond: The World is Not Enough, the Millennium Dome project that, while on schedule, has been widely labeled as a failure. The white elephant that hardly anyone wanted, and struggled to attract or please visitors. I was even a little surprised to see it was still there, since I knew it had been left empty for a while, used as a temporary homeless shelter, and other things.

Conceived under one government and then expanded in scope and executed by another government through a number of subcontractors, the project began its troublesome, unpopular growth. Public support for the project that got ever more expensive was low and in 1996 WonderBra even ran an ad campaign with the slogan “Not all domes lack public support”. 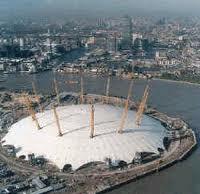 While working in London’s Docklands in the 1990’s I travelled back to Cornwall about once a month to visit my family and witnessed the creation of the Eden Project, a series of domes that housed plant exhibits in an old disused clay pit in a depressed rural community. Driven from the vision of Tim Smit, who raised the financing, and oversaw the creation of a world class exhibit that educates people about the environment. When I was travelling back and forth in the 1990’s seeing these two projects develop the contrast was stark. In London the government and committees of designers and builders were spending nearly £800 million and could not get public support or a roof fabric to work. Meanwhile in Cornwall with a budget of £80 million a truly world class destination was leaping ahead and generating a tremendous buzz. After the success of a smaller project in Cornwall, restoring the “Lost Gardens of Heligan” Smit gained local support from the public and contractors and found ways to make the project more about showcasing the area and these company’s skills rather than about him or external success. It seemed obvious that we needed some Smit genius on the Millennium Dome project, but what exactly was this Smit genius? How do you define it, analyze it, or understand it? 15 years later I am now beginning to understand.

ANT and Sense-Making
In the PMI’s September edition of the Project Management Journal there has an excellent article on measuring project success. Instead of the normal on budget, on schedule, to scope and quality-type metrics, it takes an organizational view of success.

The Authors Neil Alderman and Chris Ivory were looking for new ways of understanding success that departed from standard bodies of knowledge. They recognized the taxonomies of project management practices missed the equally important social and political aspects of managing projects. They felt this was especially true for complex and emerging projects where people are “feeling their way” toward a solution rather than following a reliable blueprint to the goal. This was the case with the two dome projects, both were unprecedented.

Large projects are complicated, and when dealing with divergent stakeholder groups they become downright complex. Engaging in these complex projects creates considerable management and organizational challenges in building and maintaining extended stakeholder networks. Rather than simply ensuring the execution of work packages, project managers need to develop and manage relationships across an extended network of project “actors”. They also need to assess the likely motivations and barriers to action using a science called “Actor Network Theory”.

ANT is basically the idea that novel projects and innovation may be described in a network vocabulary that emphasizes the interrelated nature of its components. These actor networks are built by enrolling groups using techniques including money, contracts, specifications, schedules, discussions and prototypes. These networks are not inherently stable though, and managers must continually assure actors of the benefits of their ongoing enrolment.

In Actor Network Theory, project success can be expressed in whether the networks are convergent (good) or divergent (bad). Convergent networks have clear and agreed checkpoints (points of passage) that groups agree to. Divergent networks, on the other hand, do not share a common view of the points or passage and may respond to requests unpredictably. Networks that diverge may no longer see their interests being served by the project and withdraw, leading to a network collapse.

Focusing on the efficiency of the network provides a useful view of project health separated from traditional project measures. Effective project managers are those who can build and maintain convergent actor networks over the duration of the project.

The Millennium Dome project had a weak connection of divergent contractors operating under a command structure that blamed each other for failures and cost overruns. The Eden Project on the other hand had a tight knit collection of partners driven by a uniting vision that worked together to pull off an audacious goal under unlikely circumstances.

Referring to “sense-making”, the authors explain that specifications are poor mechanisms for describing the requirements of complex projects. Instead, sense-making is the group-based activity that constrains thinking toward better solutions. This may sound counter to a mainstream understanding of project management, which focuses on tools and techniques.

Sense-making expects project initiation and delivery to be a socially negotiated phenomenon; the project is an emergent entity and not a “given” at the start. Information is ambiguous and needs to be filtered through multiple frames of reference. The role of the project manager is to assist others in dealing with this ambiguity and sense-making activities.

Convergent, sense-making activities are easier to make by organic, less siloed organizations. Organic organizations encourage close interactions between stakeholders, and authority to act emerges from having the right expertise to solve a problem rather from position in the hierarchy.

Project success in Actor Network Theory needs frequent face-to-face interaction of actor networks to make sense of things and to agree on the next steps. Recommendations for successful projects include:

1.    Establishing a clear, stable and consistent vision from the outset
2.    Encouragement for convergent, organic organizations
3.    Indentifying and acting on likely points of divergence

These successful and harmful activities were very much in play at the Eden Project and the Millennium Dome and the ANT paper authors use these projects amongst others to illustrate their points. They summarize the two project features with the following table:

Just reading about these ideas evokes many connections with agile methods. The sense-making activities and demos mirror the iteration demos and prioritization processes used by agile teams. Convergence on agreed-upon checkpoints map to iteration reviews; organic groups are our empowered teams and agile enterprises.

The vocabulary and principles of Actor Network Theory provide a new lens through which to evaluate projects and describe positive and harmful behavior. It also gives project managers new navigation tools to steer their projects. By encouraging sense-making activities, building organic teams and looking for signs of divergence, we can start seeing and controlling some of the previously intangible levers of project success.

As such, I believe Actor Network Theory is an important compliment to agile project management. It not only validates many of the practices we undertake, but also gives us new ways to describe desired behaviour. If any of these ideas resonate, you can download the PMI White Paper at the end of this post.

I visited the Eden Project again on my recent trip to Cornwall. It is still great, but much busier now as its reputation has spread. The vision of education and exploration is self-evident in how the whole operation is run. It seemed that they were conducting a massive social experiment in the sprawling cafeteria area. You help yourself to all the food and drinks you want and then tell someone on the way out what you had and pay. The food, all organic, made from scratch on site was so good and I wondered how many people just wandered off into the many biomes or exhibits afterwards without paying at all.

I asked a member of staff while paying for my lunch, the while they did not have a way of knowing how many people under pay, she did say that every month they get hundreds of cheques in the mail from people who forgot to pay for items and are now sending in money. That’s the magic of the place, the environmentally responsible ethic, the vision that united the stakeholders when building the place, is so strong it continues to permeate the experience today. What a great ongoing endorsement for a project.

Note: Parts of this post appeared first in a shorter article I wrote for Gantthead here.