Go Talk To Your Stakeholders 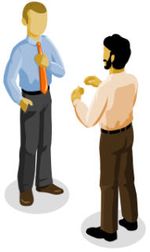 As a PM, what is the most effective thing you can do for your project in the next hour? (After finishing this article, of course!) I would suggest speaking to your project team members and business representatives about where their concerns lie and what they believe the biggest risks for the project are. The reason being that while tarting up a WBS or re-leveling a project plan might be familiar and comfortable (where you are a master of your own domain), it really amounts to nothing if your project is heading for trouble. Like rearranging deck chairs when you should be looking for icebergs, there are better uses of your time.

The frequency and magnitude of IT project failures are so prevalent and epic that people can appear in denial of their ability to influence, or “in acceptance” that a certain percentage of projects just go south. Does it need to be that way? If we spent more time asking people where stuff could go wrong rather than making ever more polished models of flawed project plans, could we change the statistics (even a little bit)?

The impacts would be huge, because the amount of money spent on IT projects now is truly monumental. Of all these failing projects, there must be many that flirt on the edge of success versus failure--wobbling between being able to be saved and past the point of no return. These are my targets--not the doomed-from-the-start death marches to oblivion but the appropriately staffed, well-intentioned projects that just don’t quite make it. I bet there was a point in the path to failure when some more dialogue around risks and issues could have provided the opportunity to take corrective action.

The trouble is that we don’t know if we are on an ultimately successful or unsuccessful project until its path may be irreversible. So we need to be acting as if we could be heading for trouble at regular intervals. We should also examine the economics behind this suggestion to change PM behavior. How much is it really worth to maybe sway the outcome of just 5 percent of the projects that are headed to failure?

An investigation into a failed Internal Revenue System project showed a 9.6:1 ration of indirect costs to direct project costs. For our purposes, we will use a more modest ratio of 7.5:1. Let’s see how these figure pan out:

So it turns out that the failing SW projects cost the world about $6 trillion dollars annually, and over $1.3 trillion in the United States alone. That’s a chunk of change, and saving just the 5 percent of projects wobbling on the edge of failure in the States would amount to $1,336B x 0.05 = $66.8B (or $1.28B per week).

How do we do it? Well, socializing the problem is a start. Let’s talk about project risks more often and raise them from the clinical world of reviews and audits up to the more human, approachable world of predictions and wagers. Ask team members to predict why the project may fail or get stuck. Ask our sponsors where they think the biggest obstacles lie. Follow up with “How do we avoid that?” and “What would have to happen to prevent that?” type questions, and follow through on the recommendations.

Just the act of discussing these issues can influence behavior. Armed with knowledge of where the really large icebergs are, people tend to steer and behave differently. To reiterate, we are not trying to prevent all project failures; just keep an extra 5 percent on track through frequent, honest dialog about the issues and a broader stakeholder awareness of the major project risks is a great way to start. So what are you waiting for?

(I wrote this article first for Gantthead, here )