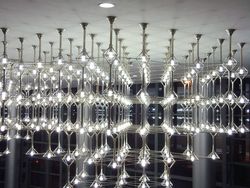 Scaling agile is a hot topic these days. Frameworks like LESS (LargE Scale Scrum), SAFe (Scaled Agile Framework) and DAD (Disciplined Agile Delivery) are in the limelight as too are companies training up ‘’Agile Transformation Consultants’’ to transition entire organizations to agile. However, successful scaling is not easy, it is one thing to put a company through a week’s worth of training and mentoring, but another completely to make lasting changes to working practices and resolve all the issues that get surfaced along the way.

The logic is simple, when executives see a successful agile project their initial thoughts are often: “Great, let’s do more of this!”, yet the solution is complex. Solving the simple question of “How do we reliably duplicate exemplary performance?” is anything but simple.  Moving from one or two successful agile projects to transitioning an entire organization to use agile methods is a challenging and daunting task.

Factors such as people who do not understand the problems with current practices and a lack of agile thinking are difficult issues to overcome. Strategies for transforming an organization to agile vary. Some favour a top-down education process, others a bottom-up, grass roots initiative.

Should the approach be Buddhist (teach the principles and allow local adaptations) or more like Catholicism (everyone must follow a strict standard protocol)? Insights into these concepts of scaling up agile can be found in the book “Scaling Up Excellence: Getting to More Without Settling for Less” by Robert Sutton and Huggy Rao.

The authors describe this Catholic vs Buddhist split along with strategies for bridging the two. The In-N-Out Burger chain popular in California takes a very Catholic view to replication where common practices are replicated with very little deviation. This is akin to proclaiming all teams will follow Scrum by the book. The KFC food franchise on the other hand, allows lots of local customization and sells egg tarts and soy milk in its stores in China that are not offered in other countries. This is like explaining the agile manifesto values and principles and allowing variations in team implementation.

There are times when the need for local uniqueness is obvious. Stanford researches tracked a software company who opened offices in Silicon Valley and India. The Silicon Valley offices had bare concrete floors and rough unfinished surfaces to provide a funky, urban-contemporary look. Yet in India rough finishings send a different vibe and some locations have more dust and are impractical for women wearing long saris that quickly get dirty as they drag along the floor. So the company quickly dropped its Catholic approach and installed carpeting.

There are also times when people can suffer from “delusions of uniqueness” when they think they are “special” or more unique than they really are and miss out on some improvement. Brigham and Women’s Hospital had very high rates of doctor customization occurring in its selection of joint replacement products despite no evidence suggesting these new products were any better. It seems doctors just enjoyed trying out new technology - a problem common to many industries.

It is possible to bridge the two poles of Catholicism and Buddhism by using swappable sub-assemblies. Like reusable chunks of Lego, these proven successful components can be used to quickly get the benefits of some standard process while allowing for local customization.

In an agile setting this could be as simple as moving the 9:00am Stand-up meeting to 11:00 to ease co-ordination with a West Coast team, or more sophisticated such as swapping iterations for a continuous pull of features via kanban and DevOps in a high change environment.

When discussing the top-down education or bottom-up change, Sutton and Rao assert that success comes from a ground war not just an air war. During World War 2 commanders often called in bombing raids with the hope of devastating the enemy. Unfortunately only 20 percent of bombs dropped fell within 1,000 feet of their target. More recently with the advent of GPS and laser targeting it is easy to think air wars are now effective. However a review of NATO’s seventy eight day air war on Serbia to stop ethnic cleansing by Slobodan Milosevic concluded it was “a major blunder that the use of ground troops was ruled out from the beginning’’.

All the research and case studies in Scaling Up Excellence find that “Scaling requires grinding it out, pressing each person, team, group, division or organization to make one small change after another in what they believe, feel or do.”

Air assaults are often useful first steps, but are rarely long term solutions. More often, territory must be won inch-by-inch working through issues as they are encountered. This requires persistence, lots of work and slow progress to reliably instill a new way of thinking and working.

For these reasons we should be wary of “agile transformations” that claim to transition an entire organization over a 2 week or 2 month period. This is more akin to an air battle. Yes, maybe everyone in the organization was exposed to some agile training and this is a necessary step, but true understanding and adaption only come through use, failure, learning and growth which take much more time.

Before planning to scale agile (or any other approach) discuss the “Catholic vs Buddhist” and “Air-war vs Ground-war” concepts with those who will be engaged in the rollout. Learn to detect Delusions of Uniqueness and employ Lego Bridging Strategies. These techniques can avoid “Clusterfugs” - an enterprise friendly word used to describe a poorly received transformation and instead can pay huge dividends.

[I first wrote this article for ProjectManagement.com here]