PMI Credentials – The Last Decade and the Next 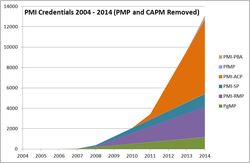 Today we take a look at how the number of PMI Credential holders has grown over the last 10 years and speculate where they might go in the future. While 10 years is a good period to look back over, the PMI’s PMP ®(Project Management Professional) credential dates back much further, to 1984, making it 31 years old this year.

Growth of the PMP was slow in the 1980’s partly due to the different communication methods being used then. The Internet did not start becoming popular until the 1990’s, so information about the PMP certification was shared mainly through periodic journals and newsletters. Another factor was the self reinforcing nature of credentials. When credentials are new few people outside of the originators have heard of them so there is little external incentive to get one. Slowly, people wanting to demonstrate their skills and/or distinguish themselves from their peers obtain the credential. Then, once it reaches a critical mass, hiring managers start asking for it so more people are motivated to obtain it and growth increases rapidly.

During the last 10 years a number of new credentials have been launched to provide opportunities for both specialization (like the scheduling and risk credentials) and diversification (such as agile and business analysis credentials). The first credential after the PMP was the CAPM (Certified Associate in Project Management) introduced in 2004 that serves as a potential stepping-stone to the PMP and is targeted for people who have worked on and around projects, but do not have experience leading and directing  projects.

Since then there have been several more credentials launched that we will discuss in more detail later, but for now we can see from the stacked areas graph below in Figure 1 that the PMP and CAPM make up the majority (98%) of all PMI Credential holders. 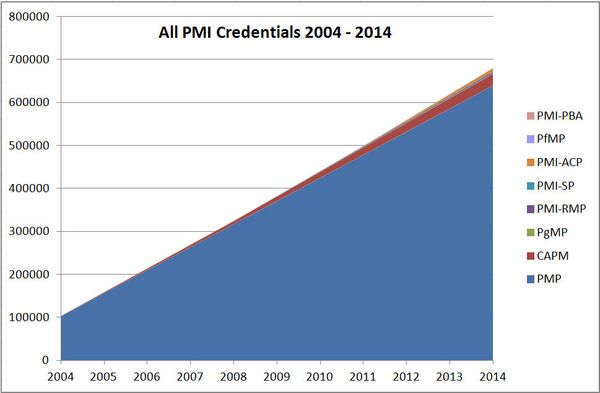 Since the number of PMPs is such a significant portion of all PMI credential holders, the volume of the non-PMP credentials is difficult to discern in the above graphic. By taking away the PMP numbers we get a better view of the other credentials. Figure 2 below shows the credential totals over the last 10 years for all the non -PMP certifications. CAPM has been around for the longest, has reached a critical mass and is growing well. 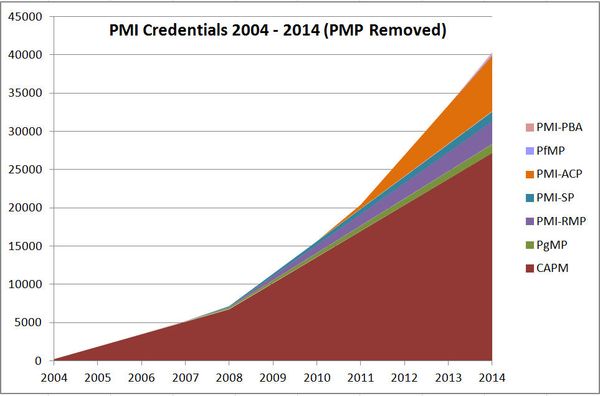 Following this theme, taking the CAPM credentials out of the picture, Figure 3 shows how all the new credentials stack up. 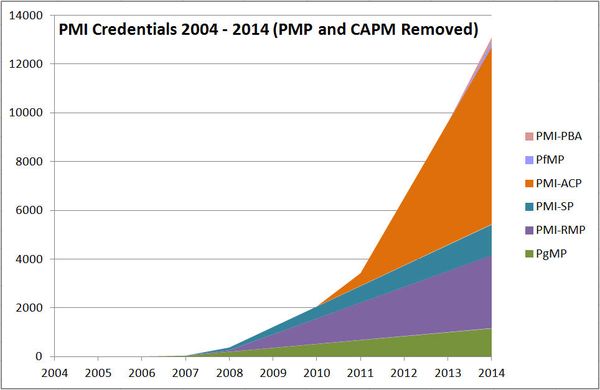 Barely visible at the very top of Figure 3 are the newest credentials, the PMI-PBA (Professional in Business Analysis) and PfMP (Portfolio Management Professional). These new credentials were just launched last year and both have around 200 holders. It is interesting to speculate which will grow faster. Portfolio management is a narrow specialization within the project management space, but for portfolio managers looking to distinguish themselves, a credential from the PMI is the logical choice.

Business analysts represent a much larger target audience to pitch to, but the market is more diverse. Competing credentials in the BA space exist already and business analysis is not viewed as a PMI core competency by some people. Perhaps BA’s will double up, adding a PMI-PBA to their existing BA credentials to differentiate themselves from their peers. If this happens in significant numbers then the PMI may have another PMP on their hands as, anecdotally from my experience, organizations employ many more BAs than PMs.

The large orange area is the PMI-ACP credential. This appears to be the current high performer of the new PMI credentials, but I suspect the PMI-BA could quickly surpass it once it gets going. Nevertheless the PMI-ACP has great potential too; a 2012 PMI Membership survey showed that 65% of PMI members were engaged in IT projects. That same year Gartner said 85% of software projects are using some form of an agile approach. By that logic, 65% x 85% of the 640,000 PMP holders might be in the market for an agile credential, that’s over 353,000 people before we add the project managers using agile outside of IT.  However, unlike the early PMP days when the PMI had the market to themselves, there were already several well established agile credentials before the PMI-ACP entered the market.

The last segment on the graph, the green slice, shows the growth of the PgMP credential since its launch in 2007. This has always been an advanced certification with eligibility requirements including (for those who hold a bachelor’s degree or global equivalent) at least 4 years of project management experience and 4 years of program management experience. A panel review and 4 hour exam on program management topics are also required. It is due to the rigorous nature of the eligibility requirements and advanced materials that the PgMP grows at a slower rate. I believe it is beneficial to have a high bar credential and it provides something to aim for. I predict the growth here will be steady but will not take off exponentially.

PMI credentials allow professionals to renew their skills acquisition on a work focussed path. Few people go back to university to refresh or obtain new degrees to demonstrate their learning commitment and up to date skills. Professional credentials can be a great way to achieve these same goals and signal these details to hiring managers.

In 2015 and beyond the PMI is competing for credential attention in a crowded, connected market place. I could take an exam at my local Prometric test centre or one online from anywhere. Recruiters are becoming more aware of this too; PMI examinations meet strict ISO/IEC 17024 requirements that ensure good question design and rigorous examination management. I believe in the future as credential options proliferate even more, only credentials that meet ISO/IEC 17024 requirements will be trusted.

It is always difficult to predict the future since we are unaware of what new disruptive technology or idea will change the market. Until brain scans become part of the interview process I think we can expect to see a healthy growth in all the PMI credentials discussed here. However I always like to hear from readers, do you see rapid growth in other fields? Should the PMI introduce new certifications and how will the landscape look in 2025?

Great Article! Am currently attending the ETSU, College of Technology and have studied about Agile Manufacturing. I will be seeking PMI Credentials after graduation this fall.

Really a nice article. I have my PMP for about a decade and I am looking at the PgMP, but it seems like it has not reached a critical mass where it would actually help my job opportunities..