Home Archives Profile Subscribe About
Conference Updates
Got Your CSM, Now What?

I have just returned from the Dubai International Project Management Forum (DIPMF). It was a very enjoyable and impressive conference, focussed on innovation in project management.

Mark Langley, president and CEO of the PMI, gave a keynote presentation on the importance of innovation. Mark explained he visits Dubai 3 or 4 times a year since it is where many of the major construction projects are occurring along with innovations in project management. His presentation featured the 2017 PMI Thought Leadership Series publication “Achieving Greater Agility” and he highlighted the Agile Practice Guide that was released with the latest PMBOK® Guide.

Visiting Dubai and seeing the scope and pace of construction development is impressive. I have written about my interest in architecture before and was thrilled to see each of the Top 15 wonders of Dubai. The conference also organized field trips to several building projects including the Burj Khalifa, the tallest building in the world. I was too late in signing up for those, but booked my own visit up the Burj Khalifa and really enjoyed it. 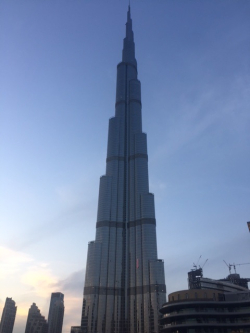 This year at the conference featured the first Hamdan bin Mohammed Awards for Innovation in Project Management. The awards were created to recognize contributions and innovation in project, program and portfolio management at the individual, team and organizational levels. With more than half a million dollars in prize money, they attracted some serious contributions and winners included: a Hyperloop project team, a UNICEF children’s project, and a large reservoir project.

Audacious multi year projects against a backdrop of shifting economic cycles are difficult to pull off. The financial slow down of 2008 -2009 saw its share of cancelled projects in Dubai. In the last several years many have been restarted or replaced by equally daring projects. With the upcoming Dubai 2020 Expo there is now another burst of ambitious Dubai mega projects.

My contribution to the conference was on a much smaller scale. I gave a presentation entitled “Agile: Panacea or Hype?” that dealt with the alignment of agile approaches with other ideas such as Theory Of Constraints (TOC) and intrinsic motivation. It also covered applicability concerns, suitability filters, hybrid approaches, and my new Beyond Agile Model.

This Beyond Agile Model is a framework I have been working on this year and the subject of my next book. I have given previews of it at the Agile 2017 conference in Orlando and the PMO Symposium two weeks ago in Houston. They have been well received and I hope to outline it here soon along with the developing website that supports it.

I am very grateful to the organizers of the DIPMF conference for inviting me to present. I enjoyed it immensely, it was a great mix of new world-class keynotes like Magnus Lindkvist (who was fantastic) and known talent from old friends like Jack Duggal who I used to train alongside during my PMI SeminarsWorld courses many years ago.