Home Archives Profile Subscribe About
What’s in your Backlog?
Focusing on Results, Not Agile Approaches 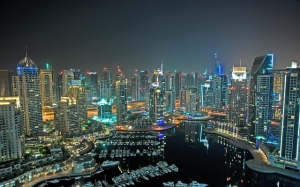 I have just returned from the 2018 Dubai International Project Management Forum (DIPMF). It was my second year presenting there and this year I hosted a session called “Agile: Not New, but Now Necessary”. It traced several techniques back through history and explained how lean, agile, and design thinking approaches share common guidance for building high performing teams.

During the conference, I mainly attended the agile and artificial intelligence (AI) sessions. Having written about AI augmented project management previously I was interested to learn more about Microsoft’s PMOtto assistant that uses Azure Machine Learning Studio. PMOtto has a chat-bot interface that uses their LUIS (Language Understanding) machine learning based natural language system to understand questions. It integrates with Office 365 tools, a cognitive services model for learning about projects, and business intelligence tools for analysis. Like having a project assistant who is always getting smarter, PMOtto will track, trend, and answer questions for project managers and PMOs.

TED speaker and child prodigy Tanmay Bakshi gave an inspiring keynote on AI. His main theme was it is more like Augmented Intelligence rather than true Artificial Intelligence. He profiled some of his work including helping those with Rett Syndrome "speak" through the detection and interpretation of EEG signals analyzed by cognitive systems.

PMI’s Murat Bicak, senior VP strategy, also gave an interesting talk on AI as Augmented Intelligence. He profiled some AI generated artwork that used machine learning to identify pleasing images. Interestingly, when control groups were asked to try and identify images as either human generated or computer generated, people rated the computer-generated images as human 75% of the time compared to human-generated art only 48% of the time.

There were also great keynotes by Yancey Strickler, co-founder of Kickstarter on building socially responsible companies and Lisa Bodell, founder of Futurethink on why simplicity wins.

The whole event was really well hosted and it was great to see a massive display wall featuring a Project Management History Timeline. It showed PM developments and local Dubai mega-projects since 1917 from the Gantt chart all the way up to the present. The early years showed the creation of the Critical Path Method, the building of the Dubai airport, formation of the PMI, and creation of the PMP certification. The middle years celebrate events like building of the world’s tallest tower, the Burj Khalifa, and breaking ground on the world’s largest solar energy facility. The chart seemingly culminates in the grand finale, the Agile Practice Guide. Having worked on the guide with many other people, it was great to see it profiled. It was a fantastic conference and I hope to be invited again next year. 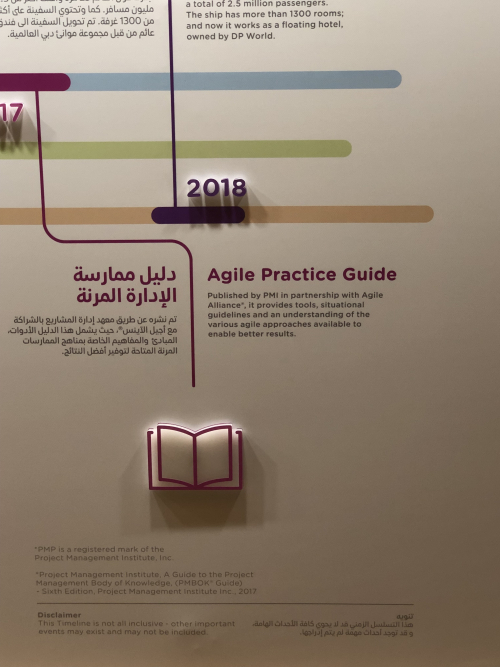 Thanks Mike for this summary.
Very informative and make me looking foreword to attend the meeting next year.