We collect these EI skills as we go through life, but if you go looking for them, you can greatly accelerate and expand your knowledge of how to interact effectively with others.

A major barrier to understanding EI is the presence of many different models with overlapping names and ideas. Even when the same people write about emotional intelligence at different times, they create new classifications. So, even if your organization agrees to use, say, Goleman’s model of emotional intelligence, which Goleman model are you using? His 1995 one, or his 1998 one? The confusion and proliferation of models are shown in the table below. Do not bother trying to distinguish between them, just appreciate the complexity and lack of standardization. 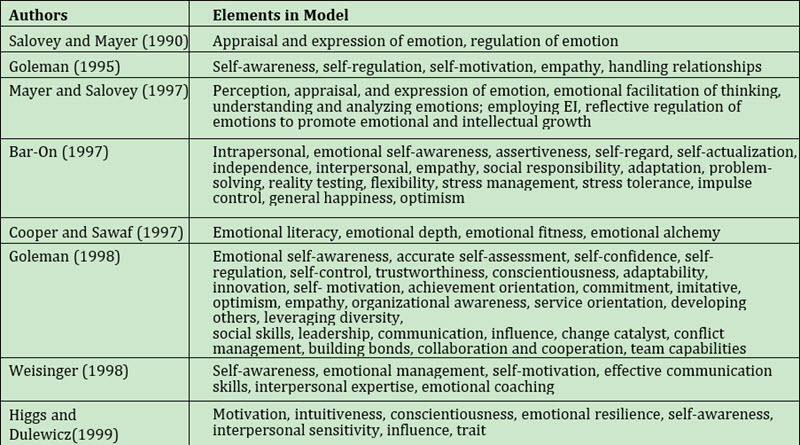 This creates all kinds of problems for teams trying to apply EI but struggling to understand why other people have slightly different ideas of how things are supposed to operate. It is like trying to use Scrum and XP simultaneously on your project but calling both approaches the same name. Most of the ideas align, but there is sufficient divergence to cause confusion. Calling them both EQ just makes the problem worse.

Interestingly, both Goleman and Bar-On quote the same original research in the development of their models and that is where we will start: Understanding what EI is and how we can improve ours to better lead teams.

Another issue with EI is that it uses similar-sounding terms to describe different ideas. To the uninitiated, terms like "interpersonal" and "intrapersonal" sound alike. Also, concepts such as empathy and self-actualization might seem intangible and vague when they actually comprise simple ideas that are easy to adopt.

To help make EI more approachable and accessible, in this series we will break it down, show how all the pieces fit together, and explain it in plain English that even the most literal person can follow. So, stay tuned for more.

To read more about EI and its relationship to effective leadership lookout for the remaining posts in this series, or get the book Beyond Agile for the complete picture and supporting detail.

Great read. I think the key to mastering one's emotional intelligence rests on two pivots. The first is one's ability to realize that one needs to interact and look to others to improve collaboration and the second is that one must recognize and implement the first early.

This is only a preview. Your comment has not yet been posted.

The letters and numbers you entered did not match the image. Please try again.

As a final step before posting your comment, enter the letters and numbers you see in the image below. This prevents automated programs from posting comments.

Having trouble reading this image? View an alternate.

Comments are moderated, and will not appear until the author has approved them.

(Name and email address are required. Email address will not be displayed with the comment.)